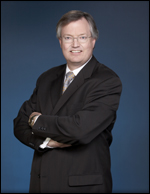 Richard N. Billington, Q.C. is the founder of Billington Barristers and has practiced law as trial and regulatory counsel since 1984. In addition to his experience before all levels of Court in Alberta, the Federal Court and Federal Court of Appeal, he has also appeared before the Courts of other provinces and territories. Rick is also an experienced mediator and arbitrator.

The foundation of Rick’s practice is his experience before the Court in all manners of civil dispute. More particularly, Rick has extensive experience in corporate/commercial litigation and corporate insolvency and restructuring. He serves clients from a wide range of industries including oil and gas companies, oil field service providers, investors, corporate boards, inventors, authors, accounting firms, trustees in bankruptcy, receivers, governments, and financial institutions.

Rick is regularly called on to address industry and professional groups on anti-money laundering and remedies to fight fraud. Rick is sought out by clients and other law firms for his experience in obtaining and defending against extraordinary remedies including injunctions and emergency orders. His work is often precedent setting, and over 100 of his cases have been reported in the law reports.

Rick is a committed supporter of oral advocacy training, including at the Faculties of Law and Management at the University of Calgary. He is active in his community including in charitable and educational organizations. The Province of Alberta appointed Richard N. Billington as Queen's Counsel in 2005.

Publications and Presentations to Professional and Industry Seminars